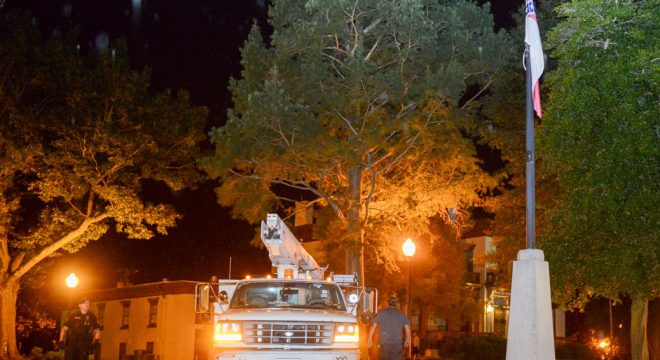 Written by John Crane | Confederate flag supporters were dealt a blow by the Virginia Supreme Court on Monday.

The court announced that it will not hear an appeal of a local judge’s decision that upheld Danville’s removal of the Third National Confederate flag from a monument on the grounds of the Sutherlin Mansion.

The Heritage Preservation Association — which requested that the court hear its appeal — will file a petition for a rehearing, HPA’s attorney, Kevin Martingayle, said Monday afternoon following the decision. The petition will be circulated among the seven-member court’s remaining four members who did not hear the initial argument, Martingayle said.

“It gives us one more shot,” he said.

The HPA has two weeks to file its petition.

In rejecting the appeal, the three-judge panel said it found “no reversible error in the judgment” of Danville Circuit Court Judge James J. Reynolds, who in October dismissed a lawsuit against the city filed by the HPA and others.

Jeremy Carroll — representing the city — and City Attorney Clarke Whitfield said they were pleased with the court’s decision.

“We certainly did not think there were any errors in the lower court decision and the panel of the court confirmed that,” Carroll said Monday.

Martingayle argued before the panel May 24 that the latest version of the state’s statute protects current monuments and memorials, including the flag that flew at the mansion. Carroll told the Danville Register & Bee last month the statute’s language does not apply retroactively to the flag.

The petition for rehearing will be shorter — with a tighter page limit — than the first request for the court to hear the appeal, Martingayle said. There is still “a decent chance” that someone will agree it needs to go forward, he added.

The HPA and others filed the lawsuit after Danville City Council adopted an ordinance Aug. 6 permitting only the U.S., state, city and POW/MIA flags to be flown on flagpoles owned by the city. Danville police removed the flag from the grounds of the city-owned mansion just a few minutes after the city’s adoption of the ordinance.

The city’s ordinance does not prohibit individuals from carrying any flag in public or displaying any flag on private property.

Reynolds had granted the city’s motion to dismiss the HPA’s lawsuit, ruling that a state law protecting monuments to wars and their veterans does not apply to the monument at the mansion. He ruled that the flag is not a memorial to the war dead, but a historical marker for the building.

Martingayle said last month that while the version of the state’s statute that existed when the monument was erected in the mid-90s would not protect it, the current version does. Every change to the law by the Virginia General Assembly has broadened protections for war monuments, Martingayle said.

“The trend has been in our direction,” he said.