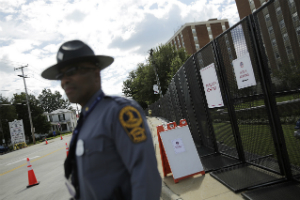 Written by Peter Vieth | A federal law designed to protect the civilian jobs of reservists and other military service members does not give Virginia state employees the right to sue over violations, the Supreme Court of Virginia says.

The state and its agencies are protected by sovereign immunity, a unanimous court said, despite language in the federal statute that purports to apply the law’s job protections to state employees.

The court’s Dec. 1 decision blocks a retaliation claim by a Virginia State Police trooper who said he was denied promotions because of his service in the U.S. Army Reserves. The trooper’s lawyer says he will ask the U.S. Supreme Court to re-view the ruling.

Jonathan Clark is a Virginia State Police sergeant who also serves as a captain in the U.S. Army Reserves, according to information presented to the court. When a police supervisor became irked with the demands of Clark’s military duties, he allegedly told Clark to quit the Army, quit the State Police or transfer.

Clark complained about his treatment and won in a state grievance proceeding, but he said he then was passed over three times for promotion.

Clark sued in Henry County Circuit Court saying his treatment was a violation of the Uniformed Services Employment and Reemployment Rights Act of 1994. The state had the case transferred to Chesterfield County, site of State Police headquarters, where it came before Judge Lynn S. Brice.

Clark’s lawyer, Paul G. Beers of Roanoke, contended USERRA authorizes suits against state agencies because it was enacted under the war powers authority of Article I of the U.S. Constitution.

The VSP argued that it could not be sued on a federal action in state court without a waiver of sovereign immunity. The VSP said neither the General Assembly nor the State Police waived immunity for USERRA claims in state court.

Brice agreed with the VSP.

“I don’t believe that Congress can use Article I powers … to subject non-consenting states to suit in state court,” Brice said at a 2015 hearing.

When Clark appealed to the Supreme Court of Virginia, he won support from the Obama administra­tion. The U.S. Justice Department filed a friend-of-the-court brief and a DOJ law­yer joined Beers in arguing for Clark be­fore the high court.

At arguments before the Virginia jus­tices in September, lawyers were pep­pered by questions from Justice D. Arthur Kelsey. The dialogue was sprinkled with references to writings of the founding fa­thers, including Alexander Hamilton.

In a Dec. 1 opinion authored by Kelsey, the court said Brice properly dismissed the USERRA claim based on sovereign immunity.

Kelsey’s analysis begins with an affir­mation of the dual sovereignty that is a defining feature of the U.S. constitution­al framework, with the national govern­ment sharing power with the separate states.

“From the beginning of the Republic, the doctrine of state sovereign immunity has been a mainstay of federalism princi­ples,” Kelsey wrote.

More than 200 years of precedent high­lights the “background principle” of the 11th Amendment that Congress may not authorize suits by private parties against nonconsenting states, the court said. A 1999 U.S. Supreme Court decision clari­fied that the authority for the principle stems from the structure of the original Constitution, not merely the 11th Amend­ment, the opinion reads.

The only exception arises in the unique context of federal bankruptcy litigation, where state ratification demonstrated state acquiescence of the limited excep­tion, the court said.

“We thus accept it at face value that sovereign immunity is simply ‘beyond the congressional power to abrogate by Arti­cle I legislation’ under these circumstanc­es,” Kelsey wrote for the court.

Beers said he would seek review by the U.S. Supreme Court. National defense is a “quintessential federal zone,” he said.

“This is a very important and disap­pointing decision that strands state em­ployees whose USERRA rights have been violated by the Commonwealth,” Beers said.

A spokesperson for the state attorney general’s office said the decision is not that broad.

“The case involved only the very nar­row issue of whether a plaintiff, as op­posed to the DOJ, can sue a State un­der USERRA,” said Michael K. Kelly, a spokesperson for Attorney General Mark R. Herring.

The decision raises questions about protections for federal military service members who experience retaliation for their service-related absences at Virginia government jobs.

The court’s opinion, in a footnote, de­scribes a service member’s right to sue under Virginia statutes “in nearly iden­tical circumstances as the federal USER­RA.”

Beers, however, said assurances about state law protections are a “red herring.”

A state grievance procedure for dis­crimination against service members does not offer jury trials, double damages for lost pay or the possibility of attorney’s fees, all features of USERRA.

“A grievance procedure is not a substi­tute,” Beers said.

“The result on the ground is very un­settling because many state employees, including law enforcement, serve a vital role in national defense as federal reserv­ists,” Beers added.

The Justice Department, through a spokesperson, declined to comment on the decision.